By admin in 5 - When the Honeymoon is Over

This happened a few years ago……

On a trip to Bangkok to visit family, Pat suggested we ‘go the the beach’ for the weekend. 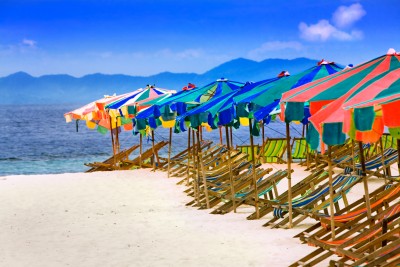 Let’s go to the Beach!

A romantic weekend for two.  Golden sand, relaxing, great food, and a chance to unwind together…..

Boy, did I have a lot to learn!  You have to realise when you marry a Thai Girl you really do ‘marry her family’………..

As the weekend approached, there was a lot of activity and excitement around the family home.  Gradually she broke the News to me. 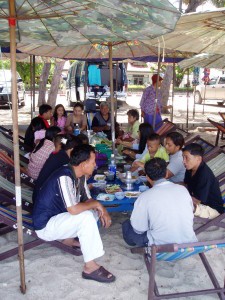 Thai people love to eat at the Beach … All Day!

“But sweetheart, my parents have not had a break in years, it would be mean not to take them with us.  And Dad works so hard. Don’t worry, they will ‘do their own thing’ and we can be on our own”.  Fair enough.

Then, “but we can’t leave my brother and sister behind, that would not be fair”.

“And my sister in law, and my niece of course” (who now lives with us.  That’s another story)

Then, “my Grandfather is so old sweetheart, he would love to visit the seaside one more time in his life”………

Then there was Auntie, Uncle, cousins…….

In the end we hired a minibus and driver!  I refused to hire a standard size 44 seat bus 🙂  The whole Soi (Street) would have been invited.

It was really quite funny.  We were going for 2 days, but to watch the preparations it was like we were going on an Everest Expedition.  Enough sticky rice and fried beef was prepared to feed a small Army.  (It was going to be a 3 hour drive).  Boxes of additional ‘rations’ were prepared, just in case.  A trip to the local Tesco Lotus was required to ensure the kids had suitable swimwear…. and so it went on.   The neighbours all watching on at the hive of activity.

The weekend came and went, and we all had a great time.  Spending most of the time eating of course, as is the Thai way. 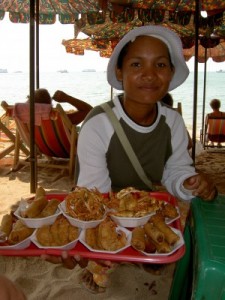 A constant stream of food vendors being summoned as we all sat on the beach in one of those ‘umbrella villages’ that all Thai beach resorts seem to have.

We both value our time alone together these days!

But I learnt some valuable lessons that weekend.

About Thai culture, our relationship, about my ‘Good Thai Lady’ and about me.

Thai people are rather like Italians.  They love to do things in big family ‘groups’.

This is not only a nice thing to do, but it also gives a degree of ‘face’ to the one providing the support.

Thai families are fun to be with  🙂   But they are like other people’s small children………..in that it’s nice to be able to hand them back and go home after the fun is finished 🙂