People are strange creatures.  We all have our quirks and our preferences.  Certain things about people attract us, be it their looks, their manner or how they speak.  Who knows, we are all very different, and look for different things in a partner. 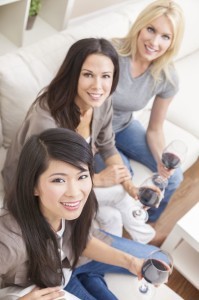 Until I went to Thailand I have to confess I did not really even notice Asian girls at home.  My ‘radar’ just wasn’t tuned to their frequency (for the enquiring minds, this is known as your reticular activating system). Like when you buy a new car………you suddenly see that model EVERYWHERE.

Now to me at least, my home town seems to have a majority population of cute Asian women.  I just don’t really notice the others.

So some guys like Western girls, African girls, South American girls and all the other great girls on the planet.  Probably because they have been to those countries and been ‘bitten’ by the unique appeal of those girls.

The same for the Ladies.  Some like White guys, Black guys, Asian guys.  Isn’t diversity a wonderful thing?

So yes, Thai girls are just girls……..but like girls from any culture that is not your own, there are additional things you need to consider before embarking on a serious relationship.

Here are some thoughts, that I might expand on in future posts:

Language.  You need to have some common ground, at least some.  You either need to speak some Thai or she needs to speak some of your language.  Don’t fool yourself that a long term relationship can be based on poor communication.

Culture.  You need to do some study on Thai culture.  Family life and how that works in particular.

Finances.  You may need to take on additional financial commitments to support her family from time to time.  Of course your future wife may be very secure financially which is great, but the majority of Thai girls who marry Western men are not.  Rich Thai girls tend to marry Rich Thai men…

Emotional Support.  In my experience and those of my friends who have Thai wives (most were previously married to Western women), we acknowledge that Thai wives can be a bit more ‘high maintenance’ emotionally.   But that’s fine, it goes with the territory.   Those guys looking for super confident, self reliant, independent and highly capable wives tend to marry Western women.

Thai’s are ‘Gang Members’.  By this I mean that Thai people like the environment of large family groups and lots of people to interact with.  Bit like Italians maybe.  Always loads of people around, multiple conversations underway.  You know what I mean.  Personally I can only handle it in short bursts.  But if you plan to whisk away your Thai Bride to live on a remote farm in the county of ‘Hicksville’ somewhere, don’t expect the relationship to last long.  Generally….Thai people like to have access to other Thai people to socialise and talk to at least.

They want access to Thai food or at least the ingredients.  I often think how hard it must have been for Pat, and still is to a degree, to pick up her life and move to join me in Australia.  On a day to day basis, no one speaks her language, no one understands her culture.  It must be like living on another planet at times.  Knowing that she is prepared to make these sacrifices just makes me love her all the more….  I’m not sure I could do it to be honest.

Thai Girls Love (No … Need) to Look Good.    Hey, who could have a problem with that!  But compared to many other cultures Thais and Thai Girls more so, feel the need to look good.  Dress well, nice makeup and so on.  It’s all part of their self respect.  And part of why we love them I guess.  So be prepared to support a few shoppng trips 🙂

Pat just looked over my shoulder at this and laughed, because I tease her about it.  I call her Nok HongYok, which is basically a Thai nickname for someone who likes to preen themselves in a mirror like a caged Bird (Nok) with a mirror on the wall of the cage……….