This is a question I am often asked. And do you know, until recently I used to make up a story about how we met!  Because I found it a little embarrassing I suppose. 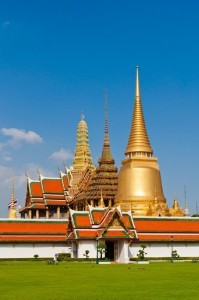 I found everything about Thailand captivating.

Now don’t jump to conclusions…. It’s not seedy. But at the time was probably considered a bit unusual.

Well, at the time I was recently divorced and was spending quite a bit of time travelling to Thailand on Business. I was captivated by Thailand and its people. And I suspected that if I was going to find and marry another partner, she was in all likelihood going to be Thai.  Like many Western men, particularly middle aged Western men, I just found Thai ladies so enchanting.

They seemed to offer the whole ‘package’ of being very feminine, very pretty, having a lovely manner and yes I’ll admit it, being somewhat subservient.  And I don’t mean that in any demeaning way at all. I think many men find that quality in a woman very attractive, quite simply because it makes them (the man) feel more relied upon.  And let’s face it, it’s in our genes to be the ‘protector, or the ‘hunter’, out their facing the World to feed our family.

So how was I going to meet my future bride?  Sure like most Western men I was aware of the bar girls.  These are often the first Thai girls that many Western men actually meet ‘close up’.  And whilst I have the greatest respect for their plight (the bar girls) and their courage in doing the job they do, I did not really see them as good marriage material.

No, I wanted to meet a ‘normal’ Thai girl, an office worker perhaps.  Not a career woman.  I already had a career and worked very hard.  I didn’t want to 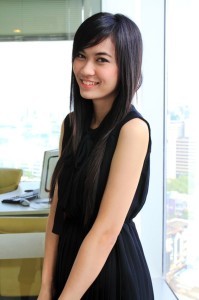 The offices are filled with cute Girls!

have a wife who worked as hard as me and got as stressed out as me.  I might talk more about what I looked for in my ideal partner in later posts.  But for now, I just wanted to meet a ‘mainstream’ girl, and who knows, if I met the right one, it might go somewhere.

So here was the problem.  10 years ago it was not that common for Thai girls to have Western boyfriends let alone Western husbands.  Certainly not as common and ‘accepted’ as it is now.  Basically any Western man seen in the company of a younger Thai woman was looked down upon with both Westerners and Thais assuming she was a ‘rental’ girlfriend.

And even though I was working off and on in Thailand, it’s hard on a brief business trip to meet someone.  I mean what was I going to do?  Advertise?  I could hardly ‘hit’ on the masses of cute office girls in the offices of my clients.  That would not look too good at all!

So I tried other means.  Online means.  Yes, I have said it finally!  We met online OK.  But back in the days before Facebook and other social media, back before online dating sites, one of the only things around at the time was ICQ, an online bulletin board and messaging platform.  So that is where I looked.

I chatted with quite a few girls.  Some seemed nice.  Some seemed a bit crazy or desperate.  Some by their use of English were likely to be bar girls.  But there were hundreds!  Life online is a bit easier these days, and I’ll post about that later.

So over a few weeks I chatted with a few girls.  Sure I flirted a bit, testing the boundaries.  But at the same time I was reading all I could online about Thai culture, Thai marriage, language and so on.  If I was going to date a Thai girl, and maybe end up marrying one, I needed to know what I was getting in to.  (Again, more on my research later)

So eventually I met Pat online.  After a few cautious posts, we started to reveal a bit more about each other and what we were hoping to find online and in life.  As we shared more and more each evening, I felt I was actually beginning to get to know Pat quite well.  I didn’t expect that to happen online, but it did.  By this time I had given up chatting with any other girls online.  We were really starting to make a connection and were sharing our innermost thoughts and hopes.

Looking back on things, it was a few 3 months, I think, before we actually met face to face.  And that was good. Because we had been communicating for 3 months already and knew a lot about each other.  The test would come when we actually met!  Have you ever met someone in person that you had initially met online?  It can be a huge let down.

The photos they shared were taken 5 years ago before they put on 15 kgs!  Or they forgot to mention their chain smoking habit, or the fact they could not speak English that well, and a friend was translating all the messages!

When I first met Pat, I was staggered!  Truly.  She was exactly as I imagined.  And she said the same about me.  We were lucky.  We had both been 100% honest with each other, even down to sharing photos that were often the least flattering J  Certainly I wanted her to realise that not only was I older than her, but not as good looking and a definitely a bit over weight.

So that first meeting?

That was hard to arrange……   You see Pat comes from a very conservative and traditional Thai family.  Like most Thai families, they were hard working and quite poor, but her parents had still managed to put all three kids through University.  It’s amazing how important education is seen in many Asian countries as compared to the West.  It’s simply the key to a good job and with that, good income and security.  No government hand outs to the unemployed like we have……….

Sorry, back to the first date.  It was hard to arrange because in keeping with her family’s expectations and culture, she could not met me alone, but had to come with a chaperone.

She asked around at work, and no one would go with her.  Why?  Because they were all afraid to be classed as ‘rental’ girlfriends if they were seen out with a middle aged Westerner or Farang as we are often called.  (From the Indo-Persian word farangi, meaning foreigner)

Eventually she persuaded a work colleague to come along on the first date and I did the same.

We met at MBK shopping centre in Bangkok and went for dinner.  It was great.  It was like I had known Pat ‘face to face’ for those 3 months.  We got on so well, and just like we did online.  So we arranged to meet the next day, and the next, and the next…………

And I you are even thinking it……………not even any touching at this stage………….

It looked like this relationship was definitely going to go somewhere.  Pat sensed that too.  So what next?

Meet the family!  Now picture this.

No more dates till I meet her parents.  They need to judge if I am a fair and decent person to be going out with their daughter.  And now the tough part.  Pat made this very clear.

If her parents did not like me, that was the end of the relationship.  She could not go against their wishes.

I’ll tell you about that family dinner soon.

Why we built this site: Good Thai Lady